Whether you are brewing coffee in an aeropress, sipping on your V60 pourover or pulling shots with a fancy espresso machine, no coffee-snob setup is complete without a proper scale.

Whilst preparing our coffee setup for our upcoming espresso machine (the Flair Signature Espresso Maker) I've been researching scales. As with grinders, there is a wide range based on how snobby you want to get.

TLDR; I went for the €29,95 Revall digital scale. It's one of the cheaper / more affordable scales that has a built in timer and is able to weigh up to 3kg for Aeropress / V60 compatibility.

From my point of view, there are two main aspects that differentiate the scales. The first one are the features and the second one the specifications.

I've seen a combination of the following features in most scales:

On top of the features, there are a couple of specifications that have to match your specific coffee setup:

The first setup I tried out was the cheapest one: a simple small pocket-scale (€17,99 Korona Anja) with a separate simple timer (€11,99 ADE TD 1601). In the end this was a mistake for my setup, for I had missed some important details and found some quirks that irked me. The scale had a maximum weight of 500 grams, making it unusable for aeropress and the timer beeped so loudly it messes up my, otherwise very zen-ly, coffee routine. The built quality of both units was actually quite okay, and the quickness/responsiveness was fine. 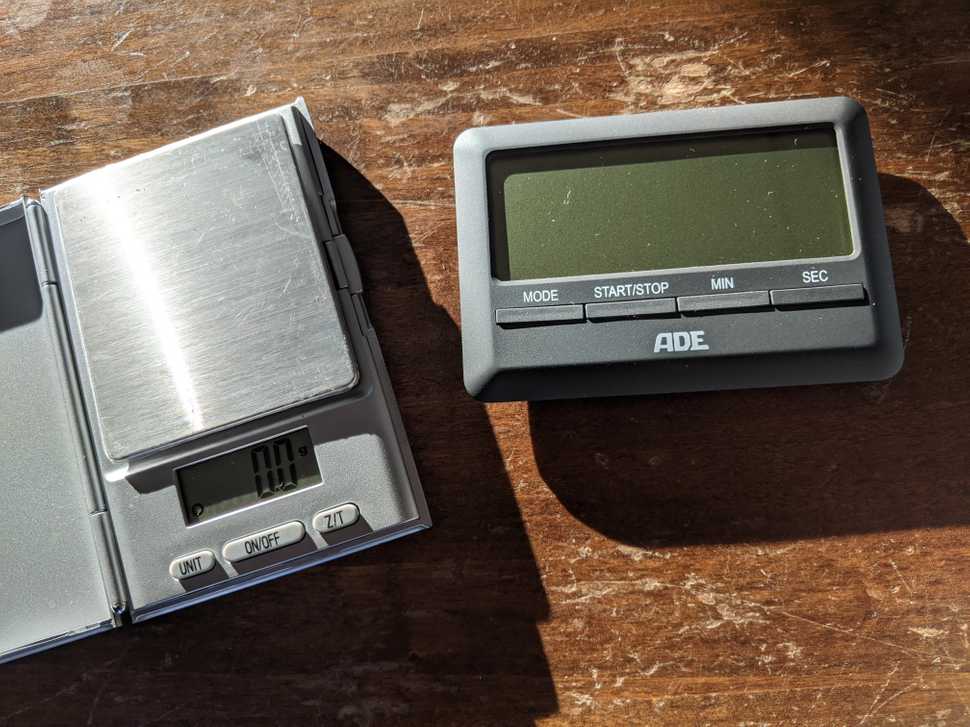 Based on my dwellings on reddit /r/coffee youtube and other coffee sources the €178,00 ACAIA Pearl seems to be the holy grail of smart coffee scales. It has all the features, good form factor, waterproofness and will probably last forever. It is ridiulously expensive though, and will probably be something to upgrade to over time once you are able to appreciate these advanced features. Loads of people opt for the cheaper solutions and will rebuy a cheaper scale multiple times before they hit the same expense as this advanced scale.

Which brings us to the medium pricepoint, where I found the €29,95 Revall digital scale. It has a built in timer, weighs up to 3kg, has an accuracy of 0,1 gram, bright display and is perfectly suitable for both aeropress, V60 and even espresso measurements. It even fits and works under the Flair Signature Espresso Maker.