While waiting for the Flair Espresso Maker to arrive and hearing about the Moka Pot as a favorite brewing method from a friend one, I decided to visit the local cooking shop to extend the Snoffeecob brewing range with one... more... coffeemaker.

The Bialette Moka Pot, famously known for their aluminium Moka Express variant with 8-sided octagonal shape, is an extremely mobile and versatile solution to brew strong italian coffee. It is advertised as an "espresso maker" and uses boiling water to build steam pressure of about 1,5 bars that pushes water through the grounds up into the upped compartment, from where it can be poured into a glass. This means it does not get to 6-9 bars of pressure to produce crema, but it does produce a much stronger brew than a pourover with no pressure, or an aeropress with about 0,35 to 0,75 bars of pressure. 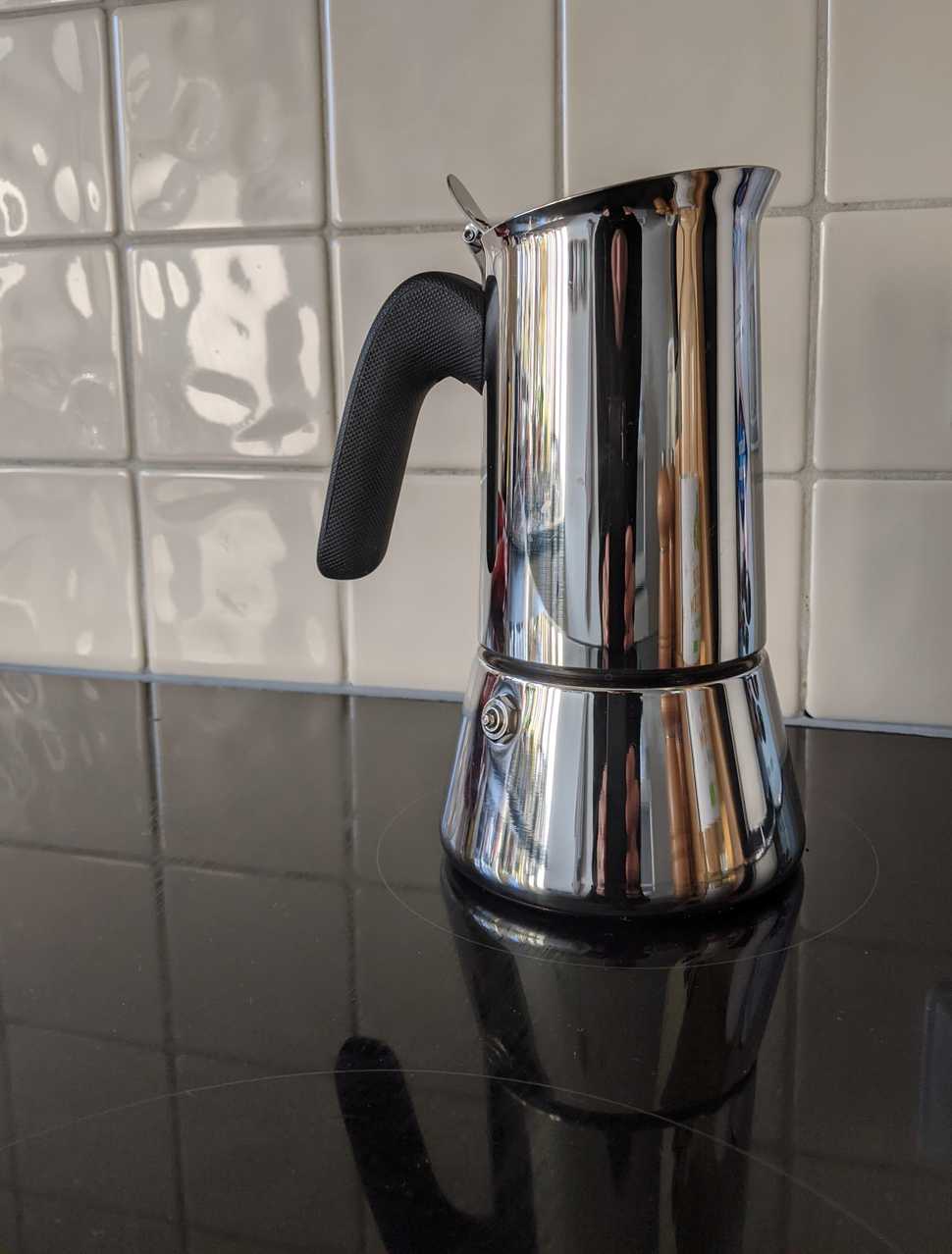 The looks of this specific Bialetti Venus model is quite different from the original octagonal shape, but the inner workings are the same. The main difference is that the Venus is also compatible with induction cooktops, by using stainless steel instead of aluminium as build material. The design is a little more modern, and even though a lot less iconic, I still like the look of it.

To start off, you un-screw the water reservoir and reveal the grounds filter. As instructed in the ChefSteps "make great coffee with moka pot featuring James Hoffman", I tried filling the filter with grounds completely, but I have found that grinding about 15g of coffee in there produces a more balanced cup for my personal taste.

We now pour boiling water into the bottom compartment, all the way up to the safety valve. The safety valve will release excess pressure to avoid this devices blowing up. This is actually one of the downsides of this machine, for creating such a steam based pressure vessel in the middle of your house is quite a scary thing.

Adding mounting the grounds filter on top, screwing the upper half back on and putting the device on the induction cooktop, at heatsetting 5 out of 10.

And there we have it. Coffee is happening! When the first drips appear, I immediately put the heat to a lower setting (3 out of 10) to avoid brewing the rest of the water too quickly. Once you hear the "gurgling" sound, I immediately remove the device from the cooktop and rinse the lower half with cold water to stop the brewing process

With the brewing done, all that is left is pouring the brew into a nice cup and enjoy the strong brew. I have found the brews a lot more flavourful than the aeropress, with super consistent results. The grinds need to be a little bit finer than for the aeropress, but definitely not as fine as you would grind for espresso. The error margin for optimal grind size is a lot bigger, which is great for consistency and ease of use.

The main downside for me would be the cleaning process. Where the aeropress produces a puck that is easily ejected, and even the flair producing a "knockbox removable able" puck, the bialetti filter doesn't let go of the grounds that easily. I have found that you need a combination of shaking and rinsing, where a lot of sludge is only removed in the rinsing part.

Other than that, it is truly a very versatile brewing device. The fact you can easily take this with you and that it doesn't require a fancy grinder make it perfect for taking it out and abroad.

I'll probably update this blog later when I have had some more experience with this device, until then: enjoy your moka pot!